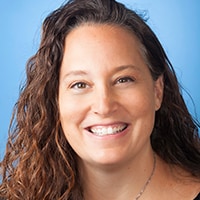 Cheryl Klaiman, PhD, has been working in the field of autism spectrum disorder (ASD) since 1993. She earned her doctorate from McGill University in 2003 and then completed her pre- and post-doctoral internship at the Yale Child Study Center.

Dr. Klaiman was an associate research scientist at Yale University for six years before becoming a staff psychologist and then the director of the autism and developmental disabilities multidisciplinary team at the Children’s Health Council in California.She was also a clinical researcher at the Stanford University Department of Psychiatry, where she examined the overlap of autism and fragile X syndrome, as well as collaborating on a longitudinal study of fragile X syndrome, Turner syndrome and Williams syndrome.

Dr. Klaiman joined Marcus Autism Center and Emory University in 2012 and was initially responsible for clinical characterization of individuals enrolled in the various research studies, contributing to best estimate diagnoses and training other staff psychologists, postdoctoral fellows, psychology interns, as well as research assistants on diagnostic and other assessment tools.

She is Director for Assessment and Diagnosis Program at Marcus Autism Center, leading a team of 15 clinicians to conduct diagnostic evaluations for clinical and research patients. She is also clinical director of a multisite, U.S. Food and Drug Administration (FDA)-regulated clinical trial working to translate our research endeavors into a tool for diagnosing autism.

Dr. Klaiman is also Assessment Core Director for the center’s National Institutes of Health (NIH) Center of Excellence grants. Her research interests center around techniques to aid in the differential diagnosis of individuals with autism, such as eye-tracking, ERP and functional MRI, early diagnosis and treatment strategies, and genetic comorbidities, such as fragile X syndrome and Williams syndrome.

Dr. Klaiman regularly teaches and trains others Marcus Autism Center and Emory University as well as throughout the state, nationally and internationally. She is a certified trainer on the Autism Diagnostic Observation Schedule, 2nd Edition, the gold standard tool used for helping determine if a child has ASD. Dr. Klaiman also co-chairs the Marcus Autism Center Summer Symposium and is a frequent speaker at that forum.

Her speaking engagements include: